The Ecostar team are looking for corporate sponsors and collaborative research partners.  If your company or academic organisation would like work with our group on the BE3 project, the new management team would like to hear from you.

Sponsors are invited to underwrite testing of Blueplanet Ecostar Electric (BE3) in the summer of at 'Pendine Sands' and/or 'Elvington Airport' in the UK prior to an attempt on the World record at the Bonneville Salt Flats, USA.

The BE1 and BE2 vehicles have generated articles in the following media: 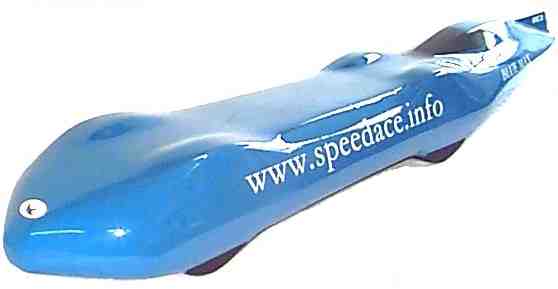 Project Blue Max above in 2011. The Blueplanet Ecostar Electric BE3

has now been redesigned for 2014 onwards. it is now

Richard Noble set a new British land speed record in the early 1980's with Thrust 2 powered by an after-burning Rolls Royce Avon jet engine, beating the 200+ mph of Tony Densham. Richard's record stood for 18 years. In the summer of 1998, Richard's record was beaten by Colin Fallows in his Vampire jet dragster, attaining 269 mph at Elvington Airport in Yorkshire.

Then in July of 2000 Colin's record was improved by Mark Newby reaching 272.9 mph, swiftly followed by Colin again in his Vampire, reaching 300.3 mph.

This current BELSR has already been surpassed by the BE1 unofficially at 160mph. The new BE3 team would like to raise the record officially with the Blueplanet Ecostar Electric.


The prototype BE1 and BE2 electric racing cars have already been reported in:

This site (and associated eco subject partner sites), generate some 130,000 hits a day, every day, 365 days a year. Help the team further serious transport research. The cartridge exchange system may be developed for EVs to refuel at service stations far more economically than those currently being installed - where with the Ecostar system there is no need for deep subterranean excavation - also, an EV using the Ecostar system may exchange cartridges anywhere using its built in loaders.


Benefits of sponsorship include:

2) Personal appearances by the drivers (to be nominated) and car at your company's functions or exhibitions.

3) Promotion of your company at events attended by the team.

and replacing it with another. It does not need a complicated service station to

do this. It does it with built-in load servos - so that is can turn around on the

Salt Flats at Bonneville, completely recharged ready for the best of three runs.

Don't you wish your EV could do that?

and name Bluebird and Blue Max are trademarks.  The BE2 and BE3 vehicle shape and configuration are registered designs ®.  All other trademarks are hereby acknowledged.  Max Energy Limited is an educational charity.